I’ve been in front of this problem for several months now and can’t seem to find a proper solution.

Plan:
I want to use macOS local APFS snapshots as the source of restic backups.
So whenever restic is scheduled to run a backup command, my idea is to make a local APFS snapshot, mount it and then point restic at this read only mounted APFS snapshot.
All this logic is put in a bash script and being scheduled with launchd.

Problem:
In order to automatically mount a local APFS snapshots with this script, I have to add bash to the list of FDA (Full Disk Access) applications in the macOS settings pane.
I have tried all the tricks I could think of but couldn’t find a way other than the above.

From a security perspective I absolutely don’t want to give bash full disk access to my machine.
That’s just not going to happen.

So I guess this isn’t restic specific I guess, but around it heh
Here is a little screenshot showing how I set it up and reproduced it: 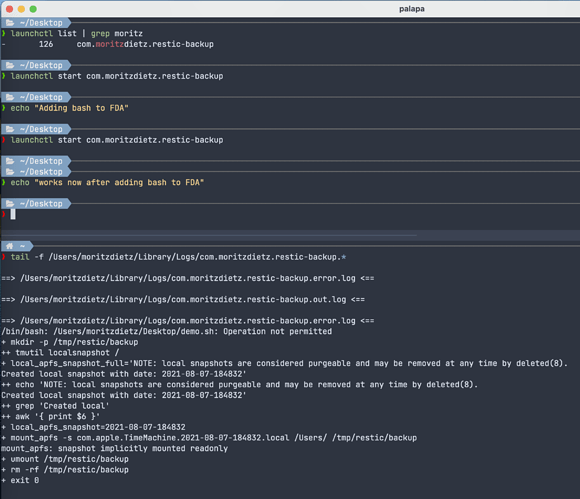 If someone wants to play around with it, here is a minimal setup which reproduced the problem:

Then you need to go into the FDA settings and add and remove /bin/bash to see the result.

FWIW, I have a bash script that runs restic which I wrap as a macOS .app using GitHub - sveinbjornt/Platypus: Create native Mac applications from command line scripts. . I then install that .app in ~/Applications, give that .app FDA in the System Settings, and it can then happily read the files it needs to.

I only ever backed up ~ or stuff thereunder, in case that matters. But what I can say is that without giving that .app FDA it will produce a lot of read errors during backup runs, and having given it FDA it’s happy. I’ve tried other methods too through the years but this one always works for me.

Ha! Thanks. Will definitely give that a try and report back if that works.

The thing is, I know of another backup software which has allowed access to Apples private APFS APIs and I am super jealous that they are gatekeeping it from others.

Making an .app bundle using the software you recommended worked to mount the local APFS snapshot! Thank you

Now I need to see if using launchd to schedule this, works as well. But a first test by simply starting the .app with the bash script which invokes restic, tmutil and mount_apfs commands worked perfectly.

FWIW I use /usr/bin/open -ga $HOME/Applications/Backup.app to run the .app from crontab.

Another year went by and another major macOS release comes around the corner bringing all kinds of “joy”. So this post seems rather unrelated to Restic itself, but as I’m trying to figure out how to use a macOS feature to do macOS backups via Restic, I thought I post it here in the case others have ventured out this route as well.

Apple must have changed things around FDA (Full Disk Access) and TCC (Transparency, Consent, and Control) with apps.

For some reason some things broke. So if someone is using a similar setup with:

I would love to hear if and how you got that working.

Creating a snapshot is not an issue, but mounting it results in an error. The script from the beginning of the post is able to reproduce the problem.

What I’m confused about is this: If I add my Terminal app, in this case Alacritty, to the list in FDA and execute the Bash script manually, everything works as expected. Below is the output of the script running and the commands that are executed.

But not when I wrap the script in an app via Platypus: 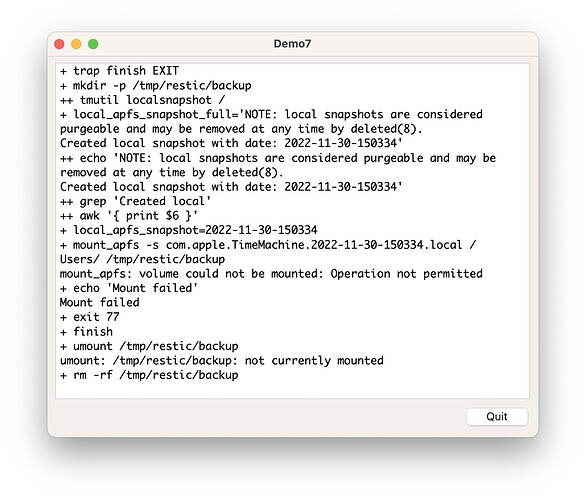 I see some errors in the console.app regarding this and I have a hunch that this is because of some security flag. Not sure if it’s SIP but I bet it’s related.

I’ll keep digging in the meantime

Ha! I think I solved it. Man this is somewhat involved if you don’t know your ways around and have some understanding of the security features of macOS.

The solution was: Signing the Platypus created app bundle with a self signed Code Signing certificate.

Here is what I did: 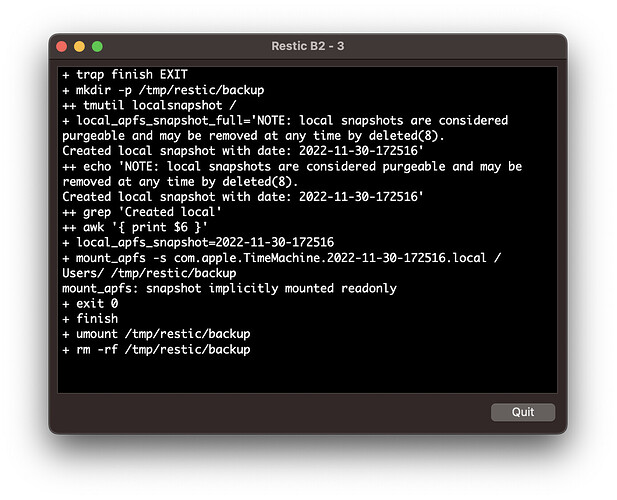