So I’ve been trying to get about 800GB of data backed up to pCloud using Restic + Rclone. I get the data up, but during the process there’s always a few errors. So I tried to do a prune. That took almost a week then failed. So then I tried a rebuild-index and prune, which also had random errors and is now stuck at “0.00% 0 / 5 snapshots” for a good 6-7 hours now. I ran the last attempt at work, instead of at home (I have very slow DSL - I can typically upload to pCloud at 90MB/s at work). Here’s what I got:

I’m not sure if it’s pCloud or if it’s using Rclone as a backend, but things just don’t seem stable. I’ve uploaded a good 300GB of other data, all at once, using JUST Rclone with no issues whatsoever. But for some reason it just isn’t working with Restic. Any ideas?

I have used Backblaze in the past, but saw a good deal on a pCloud lifetime account on Black Friday. Thought it’d be nice to not have a monthly fee. Looks like I might be switching back to a native backend. Restic+Rclone just doesn’t seem as robust.

So from the logs I can see different errors like DNS problems and some networking issues causing HTTP 500s (?!).
DNS:

Is there some rate limiting in place? I am not sure if you are at work that there could be some DoS protection in your company network preventing you from doing so many requests?!

Does a normal rclone sync work to that backend?

Weird thing is, the same thing happens at home. Also normal Rclone sync works fine with ~300GB of data (larger media files, not a bunch of small files like with Restic).

And what happens if you rclone sync a local restic repo on your machine instead of big single files?

That seems to work fine.

I started over at home instead and this is what I got. Note that Backblaze works perfectly fine from both locations. I don’t have another backend to test using Rclone, but since Rclone by itself works I’m thinking it’s Restic using Rclone.

It’s not done yet but this is the output from rebuild-index, prune, then check. 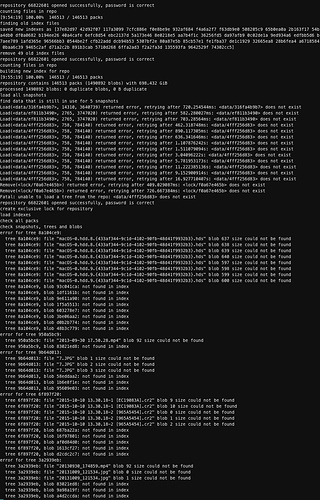 That seems to work fine.

You mean rclone-ing the data to pcloud?

I rclone’d about 300GB of data and there wasn’t a single error.

The second attempt with Restic + Rclone finally finished. This is what I got. 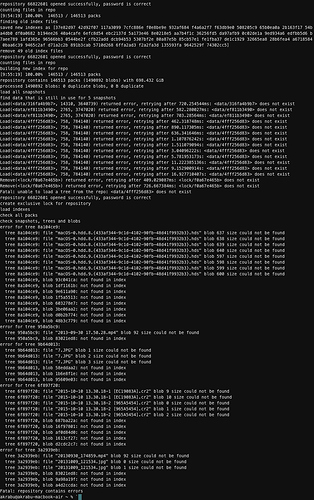 I rclone’d about 300GB of data and there wasn’t a single error.

But have you tried to/did you rclone the local restic repo to pCloud?

I don’t have a local repo, so no, I can’t try that, unfortunately.

I guess I’m just going to go back to B2. Can’t get pCloud to work at all. Even if I did get it to work at this point, I can’t say I’d trust it.

I don’t have a local repo, so no, I can’t try that, unfortunately.