How to: Retrieve A File From a Snapshot

Thanks, so happy I found this community as well!

Replacing $SNAPSHOT with the appropriate snapshot ID. Note that this restores the file in-place, which can be dangerous. If you want to ensure that the file is what you expected first, you can restore to a temporary location first, then move the file.

Then inspect /tmp/restore to make sure it contains the file you expect. If it does, move it over the file you want to replace.

Another common method if it is just about a single file is to use restic mount (on supported platforms like linux): This “mounts” all contents of your repository to a given path.
This can then be navigated by your favorite file browser (allows all read only file operations, e.g. reading the content or diffing with other files) and restoring works by just copying the correctly identified file to its original location.

If you restore big amounts of data, the restic restore command should be preferred, however.

Awesome, thanks so much. I’m leveling up here.
I keep getting Fatal: Please specify repository location (-r)

Another common method if it is just about a single file is to use restic mount (on supported platforms like linux): This “mounts” all contents of your repository to a given path.

I tried using this in the past but found it to be horrendously slow on large repositories to the point where it was completely unusable. Maybe it works better on small repositories.

Well, yes, I assumed you would be specifying this as well. I have scripts that set RESTIC_REPOSITORY so I don’t need -r. If you need to specify the location then just add that parameter.

I tried using this in the past but found it to be horrendously slow on large repositories to the point where it was completely unusable. Maybe it works better on small repositories.

Recently, Improvements on speed in general and mount in particular have been done and some more are on the way. You might want to try out the latest beta (which should be already faster especially for large files within your repo) or this optimization:

I see, the computer is telling me it needs the parameter -r which is in the manual. Is a parameter and a flag the same thing in this case?

hmm…I see the file but the computer is telling me there is no file.

Is there a repository at the following location?
/etc/yum.repos.d

I see the /config getting added in there. Possible issue.

What am I missing?

Is a parameter and a flag the same thing in this case?

This has nothing to do with the restic repository, which is the location what you backed up your files to.

Here is the documentation that talks about creating a repository. When you set up your backups, what did you use as repository then? Or have you not started using restic yet?

This has nothing to do with the restic repository, which is the location what you backed up your files to.

Oh okay, I originally tried that but had the quotations in there so that was a misfire.

This goes through successfully

Restore directory is empty =(
The file should be in there no?

Or have you not started using restic yet?

Been doing backups to my external hard drive for a while now.

Restore directory is empty =(
The file should be in there no?

I have no idea what is in your backups. Try restic ls b55535fc | less to show the contents of the backup. Run man less if you aren’t sure how to use the less pager (it will let you scroll through the output, which is useful if there are hundreds of files in the backup). 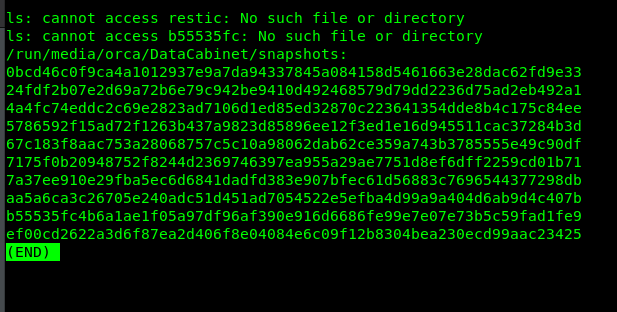 Just shows the snaps, not the files.

So, must see in the snapshot to confirm I have the file directory correct. File was incorrect, I needed config_default.php, not config.php, but the same issue happened. File didn’t go to /tmp/restore.

The less pager comes up but it only shows the snaps, it’s not accessing the contents of b55535fc snapshot.

That’s not the same command as the one in my post. You have transposed restic and ls, and you’ve forgotten -r.

shoot, I tried more commands unsuccessfully. Each command says it went through but the /tmp/restore is still empty as per

I tried these commands this morning.

Show the output of:

thanks for the help cdhowie

So it looks like there is no such file in the backup. If you run it without the grep pipeline, does it dump a list of files? Do you recognize any of them?

outputs lots of lines which I recognize so that’s good.

sudo restic ls -l -r /run/media/orca/DataCabinet/ b55535fc | egrep ‘config.php’
Outputs files, but not the file I am looking for, Media Wiki and phpBB only.

The actual file I messed up is /usr/share/squirrelmail/config/config_default.php so that is what I should be searching for.

returns NIL which I don’t understand, like you said “the file is not there” but it has to be I back up my entire filesystem with:

The snapshots are about 40GB so this tells me the entire system is backed up so the file must be there unless my backup command is wrong.

Is there a way I can see the file directory of the snapshots?

This means that you have never backed up the file you are looking for. Please verify this by showing us the output of echo $HOME. If the beginning of the path that this command outputs doesn’t match /usr/share/squirrelmail/config/ then you simply never backed this file up in the first place, and that is why it is not in your backup and that is why it can obviously not be restored from the backup.

This is completely outside of your home directory ( ~ )

I want to back up everything at once. ~ and /

This is a blessing in disguise actually. Here I was with total piece of mind knowing my company is now safe from data loss.

Honestly, and I say this not to be rude but to make you understand - you totally need to educate yourself on the basics of using your operating system. You seem very lost in what even the most basic commands do or how to structure them, what the files in your filesystems are, what the different paths in your filesystem are, and which paths cover what (for example, / will cover ~ so if you back up / you don’t need to also back up ~)

So yes, the answer to your question is that you can just add / at the end of your backup command, but if you want to back up everything you can just replace the ~ with / instead since that’s the more proper representation of “everything”.

Note that you’ll probably want to exclude certain directories, there’s a lot of files that aren’t relevant to back up at all, e.g. some runtime and system files. There should be a bunch of topics about backing up (and I think also restoring) full Linux filesystems or similar, feel free to search a bit to perhaps find them. There’s a lot of people backing up their entire system.

The blessing in disguise isn’t so much due to an actual disguise, you should know that if you back up ~ this will not include /. There’s nothing disguised here at all

Apologies if you feel offended, but I’m just bringing up the elephant in the room. Hopefully for the best - if you continue like this it’s just a matter of time before you run into some really big problem or data loss or vulnerability due to not knowing how your system(s) work. Noone wants that to happen!